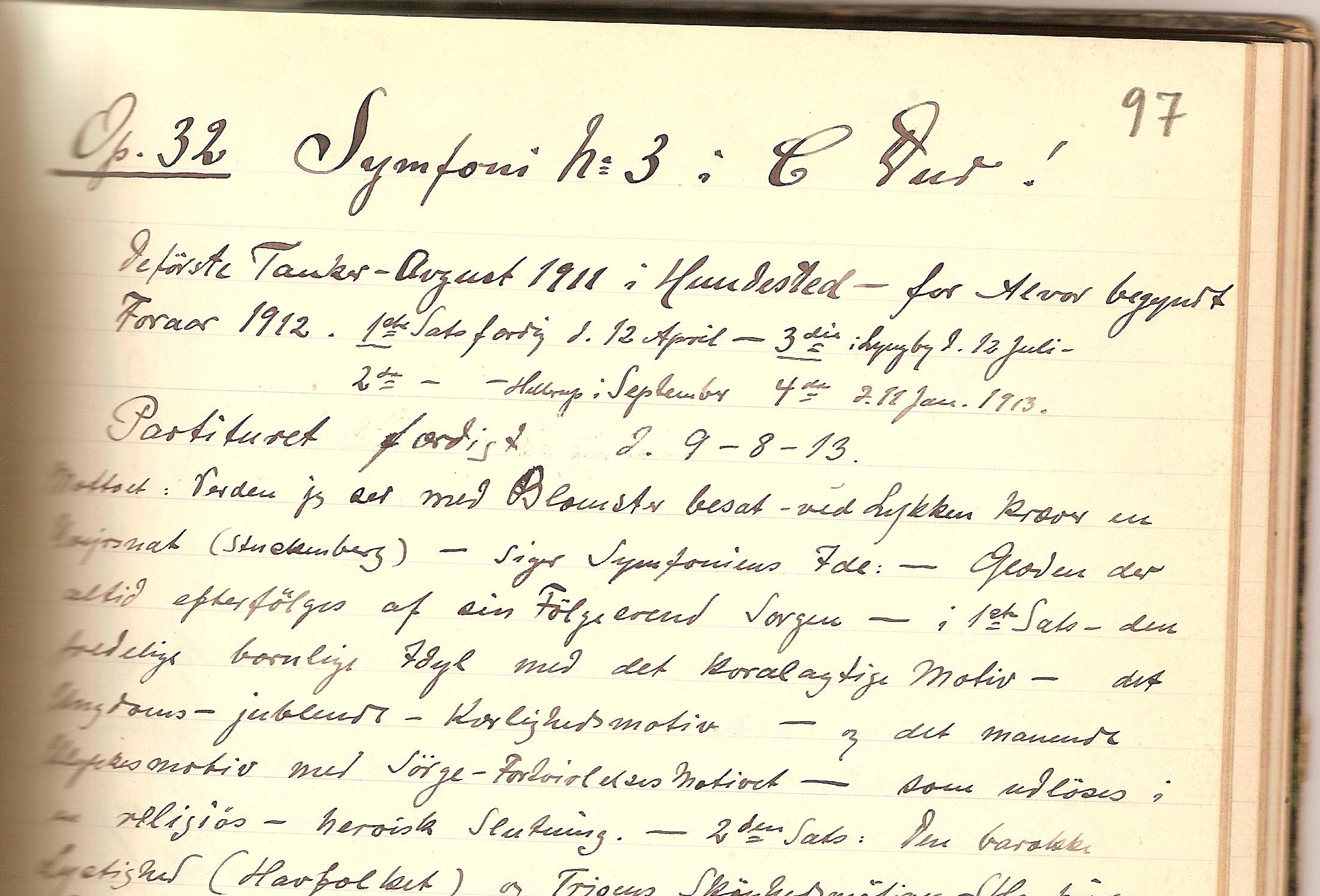 Symphony no. 3 is arguably Ludolf Nielsen’s greatest masterpiece. He composed it at the height of his creative powers (1911-1913) and considered it his fullest achievement. Nevertheless, the symphony was performed only a few times during his life, and a printed score only came in existence in form of a holograph copy of the handwritten score. The score was printed in Berlin in a very limited number, maybe only 10 copies. A handful still exists today, but sadly the only set of orchestral parts have gone missing since the first and only recording was made in 1999 by Bamberg Philharmonic Orchestra and conductor Frank Cramer.
Luckily, it’s a great recording! But obviously a new score and corresponding parts are desperately needed if the symphony is to have future performances. That seems to be coming closer now. 26 year old Ludolf Nielsen expert Christian Biskup from Germany is working on a new edition.

Why have you started the huge work of producing a new edition of Symphony no. 3?

“Since 2013 I have made many new editions of Ludolf Nielsen’s unpublished works. I decided to upload a few scores on www.imslp.org, and imagine what happened – the music got performed! The rhapsody Kildemarked got a live performance in Brazil, and some other works like his Fresko for viola and organ got a few performances in Europe. So, I got the feeling that the only reason these works weren’t performed was the lack of usable material. That’s the reason for the new edition of Symphony No. 3 – it’s time to offer score and parts for this brilliant symphony!”

What is the situation concerning the sources?

“Well, I don’t have much choice. I use the holograph score, produced by Ludolf Nielsen himself. The Royal Danish Library made the score available for their online collection. That was my luck – I have a copy of the printed score at home, but now I can work with a high-resolution digital scan.
The score itself is written in a very clear handwriting. Sometimes I must correct a few things, mostly chromatic signs. Or his crescendo marks… he was not a guy writing clear instructions. Some parts are doubled, e.g. a phrase in the Flute 1, Flute 2, Oboe and so on. While the crescendo in Flute 1 starts on beat 1, in Flute 2 it starts a bit later, in Oboe 1 on beat 2. Now the decision is on me.” 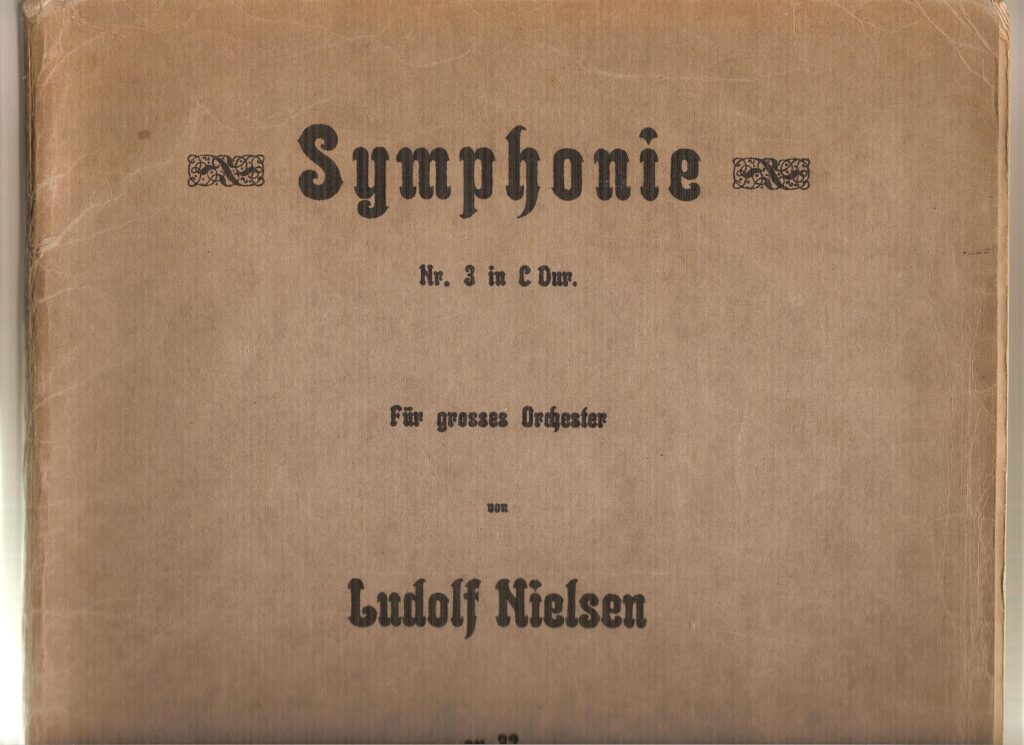 Frontpage of the holograph score

What kind of compositional insight do you achieve with a detailed work like this?

“After editing a few scores, you get a feeling, or an expectation, how Ludolf Nielsen may solve the orchestration. In the case of Symphony no. 3, I know the music very well, thanks to the recording made by Frank Cramer. But there are discoveries at many points, e.g. small motifs I never recognized before. And this is the fascinating part of my work – to discover unknown details and to hear more and more the closer I get into the score.
In his later scores it’s sometimes possible to forecast how he continues, but in Symphony no. 3 it’s impossible for me. He really knew how to hold the tension with unexpected transitions and new ideas!”

How will you describe this symphony? And how does it compare to Ludolf Nielsen’s other works and to symphonies by other composers of the time?

“It’s definitely not as “Danish” as Symphony no. 2. You can really hear the influence of the modern German music in this symphony, not just in the big “Straussian” orchestration with six horns and triple woodwinds. Bruckner comes to my mind, especially in the first movement, although there are those typical broad Ludolf Nielsen themes, the chordal work and counterpoint keeps substantial importance. Sometimes he uses the woodwind or the brass unisono like an organ stop – like Bruckner. But he’s much more on top of his time, although no one during his time observed that. There are parts, like the short fugato after the beginning, where it’s difficult to find a tonal base. And I don’t have to mention the finale, when Nielsen lets the orchestra crash in a very rough and brutal way!

The author Hugo von Hofmannsthal once said that a work of great art is a coexistence between parts of strong complexity and parts of great simplicity. Those “simple moments” in the symphony are the Danish-sounding parts which would be impossible in German music! When Richard Strauss uses Austrian “Ländler” to picture a bucolic countryside, Ludolf always comes back to the typical Danish in 6/8 or 9/8 with accompaniment in open fifths or birds twittering, like in the wonderful third movement.

But it’s not a “Dance Symphony” like his Second. It’s much more pensive, dark – it’s a real fin de siècle work, and – in my opinion – it could easily measure against the works of Strauss and Mahler (and Nielsen definitely composed better themes than Strauss!).
In Danish music it’s difficult to find a direct comparison. Carl Nielsen has a completely different style, Hakon Børresen and Louis Glass are more romantic. Rued Langgaard comes to my mind. In his music I also feel this German,”Straussian” touch.” 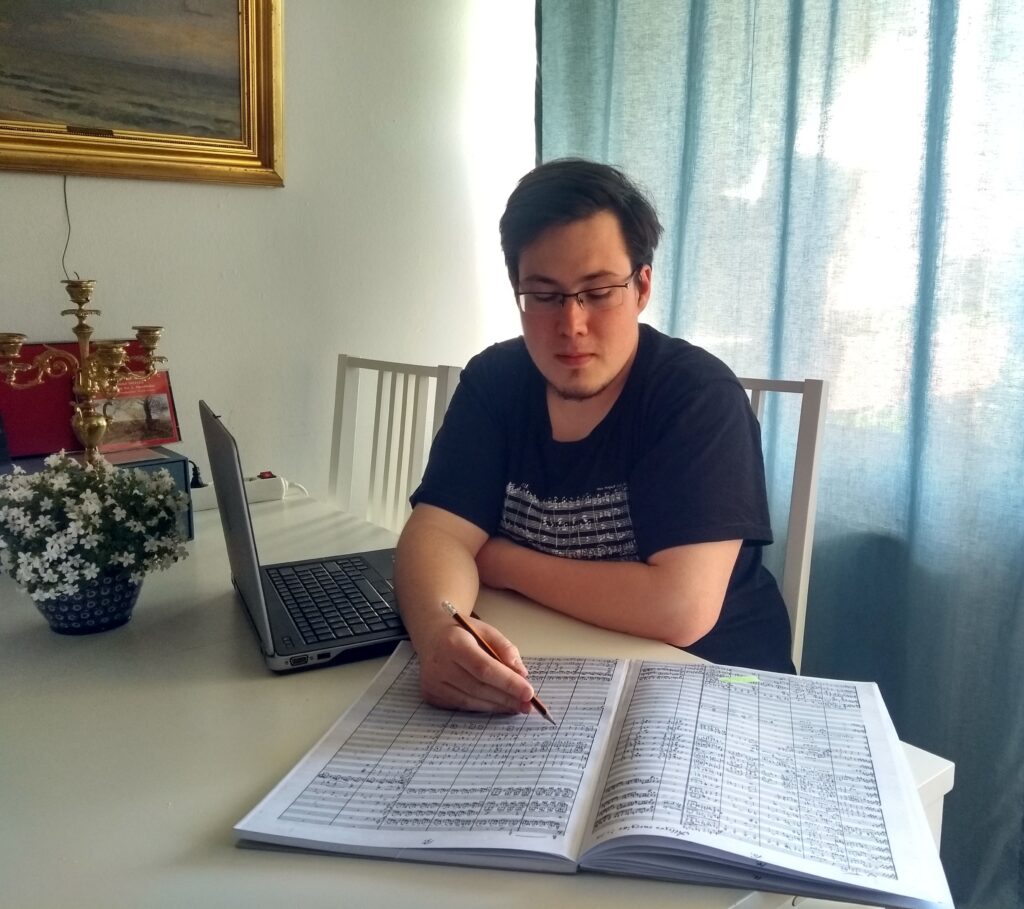 Christian Biskup working with the score

Why have you bonded so strongly with the music of Ludolf Nielsen?

“Well, it’s a long story! For my 13th or 14th birthday – I cannot really remember – I got a bunch of CPO cd’s, including works by Enna, Børresen, Gade and other Danish composers. And of course, a cd by Ludolf Nielsen. This recording of Symphony no. 2 conducted by Ole Schmidt became the start of “a great love”. I loved the themes, the folk-tune-like motifs, the orchestration and the composer’s ability to create great climaxes. This was the kind music I had been waiting for.
I started to collect every available Ludolf Nielsen recordings – that was not that easy in Germany, as most of them were out of stock. As an amateur concert artist, I wanted to see the scores, too. I found a few, and the more I played, the more I came to the belief that this music had to be performed.

Most of Ludolf Nielsen’s scores are located in the Royal Library in Copenhagen. In Denmark, I came in contact with the Nielsen family – a wonderful and generous family. They are really happy that someone is spending so much interest in their forgotten relative. Doing new editions to spread Ludolf Nielsen’s music is my way to say thank you for the hours of joy with his music and his family.”

The top picture shows Ludolf Nielsen’s notes on the composition of the symphony.
Listen to the complete Symphony no. 3 here: